Last Tuesday my band Voice Of Apollo played a gig at Revolver Upstairs. I had the usual dramas; when we were setting up my amp kept on showing “er”. It’s never done that before, so I was really panicking. Turns out it was because I had it plugged into the wrong input jack on the cabinet (8 ohms instead of 4 or something) - and the head was smart enough to tell me so. Still gave me a few worries while we were setting up! Next time I’d better bring along a distortion pedal in case something goes majorly wrong with my head :) 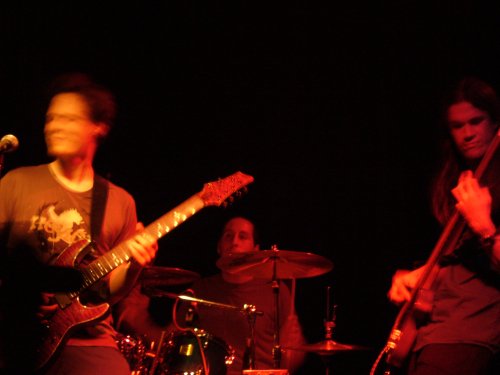 I was also playing through a Vox cab (it was provided by the venue)- I was worried we were going to sound like the Beatles, but it sounded pretty nice - so I can’t complain. Craig was playing through a Yamaha rig which gave him a great sound - lots of top and bottom end. But the best thing about the show was that Randall’s bass drum was miked up - so we had some nice double pedal madness! He was also playing a Yamaha kit and he tells me that it was really nice. It was also the second gig in which I was playing the 7 string, so that was cool. 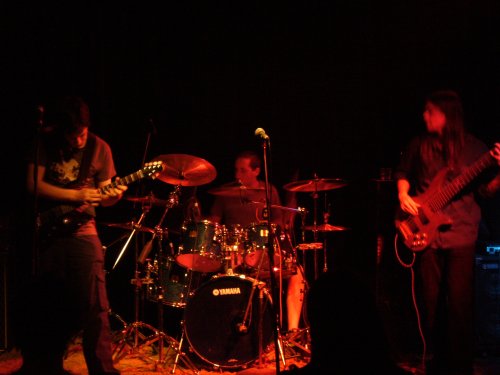 The guitar solo’s went over well. I’m always worried about how people will react - I think I’ve hung around too many indie-rock losers who abhor guitar solos. Well SCREW THEM. I only did a few solo’s (2 or 3) and they actually received applause! Next time it’s going to be even more finger tapping madness and crazy fretboard antics. 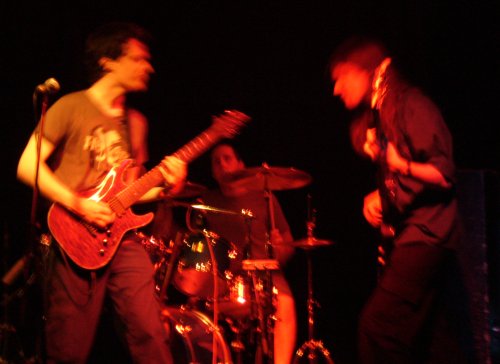 Thanks go to John D and Chris K for taking the photos, and a huge thanks to everyone who came along! You’re the reason the gig was fun! We made a few (obligitory) mistakes;

- I cut off Craig’s bass solo way too early (sorry mate), as I thought he only wanted a few bars (I think I only gave him two, dur)

- We stuffed up the ending of the last song, but Randall covered it really well

- We also slightly stuffed up the intro to the last song, but we got away with it.

Plus a special thanks to Dad for putting up with the previous band in order to hear our short set. It was the first time he’d seen us play so that made it even extra special!